One of the interesting changes that’s part of the coming release of Sitecore v9.3 is the integration of the Solr installation into the SIF scripts for developers. Given I’ve had a go at doing this myself in the past, I thought it would be interesting to look at their approach and see how it works…

This investigation was based on the “super-secret MVP Preview” of the release, so it’s possible this may change a bit before it’s released officially…

How is it integrated?

There’s a new SIF file named “Solr-SingleDeveloper.json” which you get in the setup files bundle. This is the setup process for a simple developer’s Solr instance. You run it in the same way you have been doing for the Prerequisites.json file up until now:

So you can take this json, install SIF v2.20, and use them to set up Solr on your developer machine – or onto a remote machine if you don’t want your copy of Solr locally.

There are a pile of parameters declared at the top of this file. There are a set that you’ll probably want to edit for your installs:

And then there are some you probably don’t need to adjust for most installs:

How does it deal with Java?

As mentioned, this script is using Redhat’s OpenJDK rather than Oracle’s or the Github version. The tasks configured in the script download the appropriate file and unzip it to your chosen setup folder. I note that the configuration for Solr is rewritten to change the Java home path in config – so this is installing a private copy of java for this particular instance of Solr.

That’s not the way I’ve tended to do this in the past – but it’s an interesting idea. If you make use of other things requiring Java, and have issues with version conflicts this could be very useful.

And because of that it doesn’t do any of the environment variable setup that I’ve tended to do in the past.

The config above defines the DNS name for the certificate, and there’s a task in the script to generate a file from this. This code makes use of the Java certificate tools rather than the PowerShell ones that the rest of SIF (and my scripts) use. Don’t think it makes any difference – but it’s a different approach to my “sign it with the same root certificate that SIF uses” from last time.

It still ends up with a trusted PFX file, though.

The Solr install is nothing out of the ordinary – download it, unzip it, and rewrite the configuration.

Though interestingly the config-writing code seems to append the changed config to the end of the file – rather than my usual trick of replacing lines to remove the “REM” from the start and set their values.

It also seems to test things like the port number, and not install if they’re not free – which is a helpful safety check.

This is another area where this script takes a different approach to the one I’ve used before. Rather than my usual NSSM solution, this script makes use of the Apache Commons Daemon. That seems to be the “official” approach to running Java as a Windows Service.

But it seems like it works in a pretty similar way to NSSM in the end.

So what happens when we fire it up? Well, in the first instance you get a pretty standard SIF window: 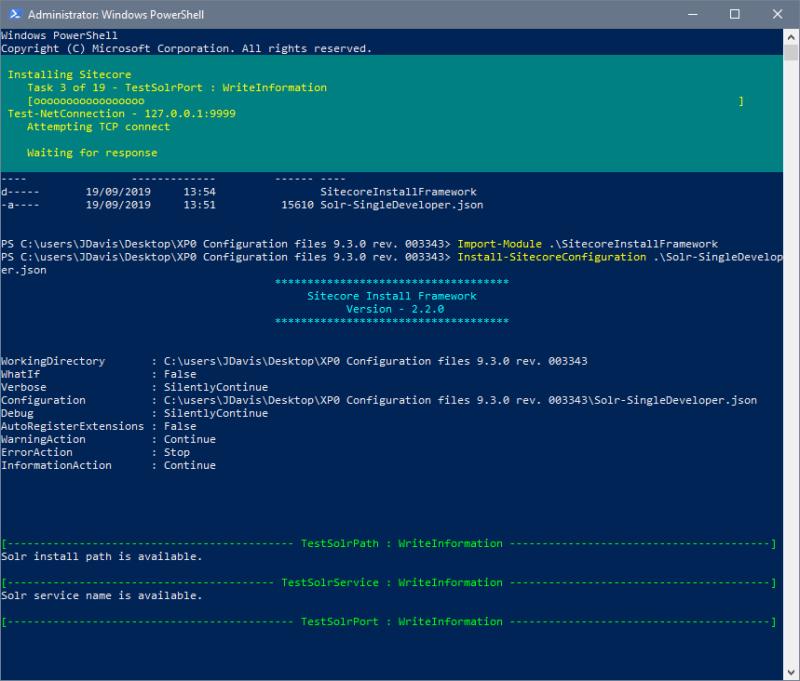 And when that process finishes, you end up with a folder full of Solr:

You can see the folder has been created under the “SolrTest” folder that I specified in config, and it’s put the service prefix of “SIF-Test” on the front of the “solr-8.1.1” folder name as described above…

And there’s a similarly named service: 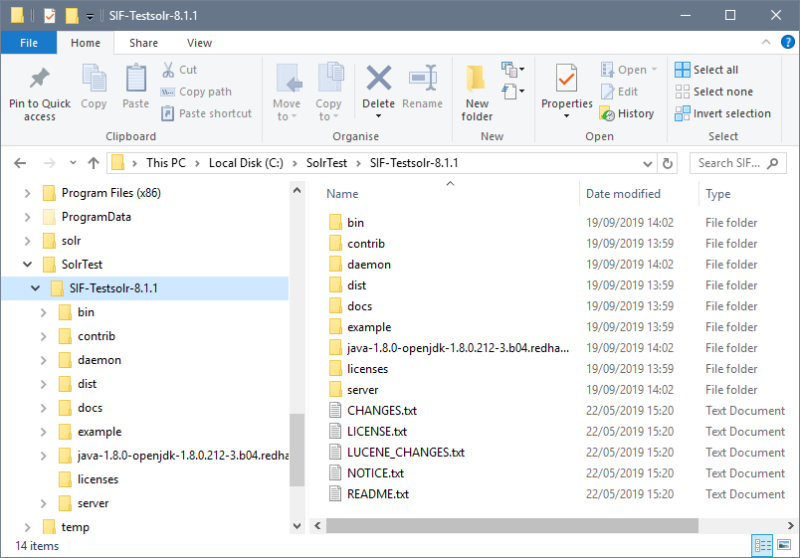 And it does indeed leave you with a happily running server.

One thing this script provides that I never got around to was uninstall support via SIF. If you run

Then it will remove the service and the folders.

So overall, a useful addition to your developer-install arsenal, and gives some interesting insight into alternative approachs to those I’ve tried before…

One thought on “A new option for developer Solr installs”